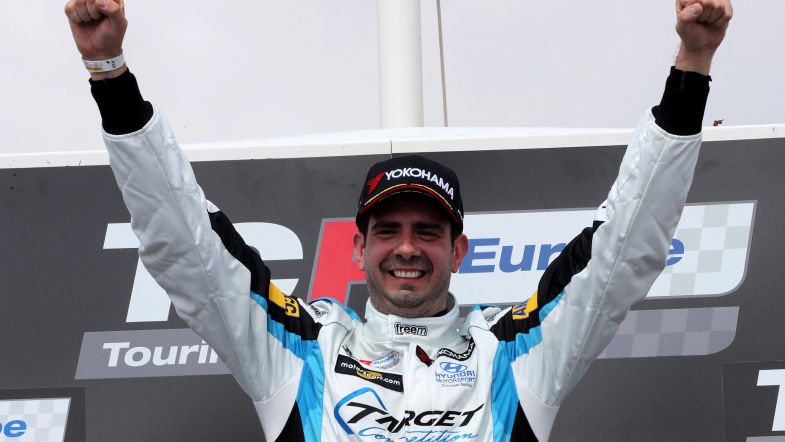 Dusan Borkovic leaves Paul Ricard with his bag full of points, as the Serbian won the second race of the TCR Europe season opener to take 55 points. The Hyundai driver made a last-lap move on Audi’s Jean-Karl Vernay, who finished second ahead of Daniel Nagy.

Just before the race rain started to fall on the circuit, although too late to switch to wet tyres. In tricky conditions Vernay pulled off some good overtaking moves to finish the opening lap in the lead, ahead of Jens Reno Møller’s Honda and Francisco Mora’s Hyundai. Josh Files, who was in fourth fighting with Mora for position, lost control of his Civic and, although he made a good recovery, the Brit lost several places and ruined his tyres.

Meanwhile Borkovic consistently made up ground to second place, but the race was neturalised due to a big crash for Igor Stefanovski, who spun out on the painted run-off area and hit the tyre wall hard. After two laps under safety car conditions, the race was red-flagged to allow the marshals to clean up the debris and fix the barriers.

Vernay was leading ahead of Borkovic, Nagy, Cupra’s Mikel Azcona and Reno Møller. Stefano Comini had made a remarkable charge through the field, ending up as high as sixth in his Race Republic Subaru WRX STi, just ahead of Volkswagen’s Maxime Potty, Mora and Target Competition’s Kris Richard, with Honda’s Attila Tassi completing the top ten.

At the restart Vernay took some breathing space, but only briefly as Borkovic seemed to be much quicker on the drying track. However, the Serbian had to defend from Nagy and lost a couple of seconds from the race leader. With two laps to go Vernay had a two-second advantage over the Serbian, but the Target Competition driver quickly closed in and made his move just on the last lap with a clean move over the Frenchman. Daniel Nagy completed the podium in third, ahead of Mora and Azcona, who is still under investigation due to having allegedly gained a position by infringing track limits. The top five were packed and had a spectacular and clean fight.

Attila Tassi completed his charge through the field by placing his KCMG Honda Civic in sixth, ahead of Jens Reno Møller, Cupra’s Danny Kroes and Hyundai’s Loris Cencetti. Despite some significant front end damage, Comini still managed to finish in the points in tenth. TCR Italy champion Nicola Baldan had tried to attack the Subaru, but he made contact with Reece Barr and destroyed his front right suspension in the process.

Borkovic now holds an advantage of 19 points over stable-mate Daniel Nagy in the championship.